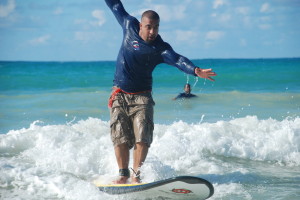 Taranveer Dhillon, also known as Tka, was an avid sports enthusiast. Growing up and all the way into his adolescent years, Tka continued to be active in playing multiple sports. Soccer, football, and dodgeball were all athletics Tka enjoyed. Although, his first love and devotion was always hockey. By the age of 6, Tka was able to skate and play hockey. This passion of his, would wake his family up for 4 am practices in the cold winters of Kamloops. Together he and his family undoubtedly travelled across B.C to play the sport.

When Tka was 16 years old,  he played hockey for the B.C. Team in a tournament in Germany. During the tournament, Tka broke his wrist. Instead of worrying and enduring the pain, Tka was more concerned whether he would ever be able to play hockey again. After being taken to see specialists, they were more troubled if he would ever be able to use his hand for basic functions. Tka was devastated and told his mom that he had no life without hockey. While he wore his cast, Tka went to watch his team games and practices for three months straight. But he did not give up, his hand healed up and he went back to playing hockey as soon as possible. Back and better than ever, Tka played with immense passion and great integrity.

With the highest level of sportsmanship, Tka never quit. He was named MVP several times and winning scores of trophies. When his father suffered an angina attack and was sent to the hospital, Tka, did not know how to cope so he took all of his hurt and frustrations and fueled it as inspiration and motivation for his hockey tournament, which he once again won MVP. When his Dad was finally able to attend the final game. Tka handed the trophy to his father, and said, ‘This is for you Dad’.

As a compassionate individual, Tka grew a passionate of supporting children and teens in being the best that they can be. Tka was the person to come to when any of his friends needed someone to talk to. He helped them with their emotional, physical, spiritual and mental challenges. Tka was devoted to empowering the men around him and he always did it graciously.

Sadly, in 2013 at the age of 32, Tka unexpectedly passed away.  To live on through Tka’s spirit and love for the game, Tka’s Eternal Life Society was created to ignite the movement for empowerment of men through sports and workshops.

{"timed-popup-delay":20,"cookie-duration":14,"popup-selector":"#popup-box-sxzw-1","popup-class":"popupally-opened-sxzw-1","cookie-name":"popupally-cookie-1","close-trigger":".popup-click-close-trigger-1"}
Enter your name and email and get the tourney updates!

Interested in playing, volunteering, watching? Sign up to be the first to know when registration opens up.
Your information will *never* be shared or sold to a 3rd party.